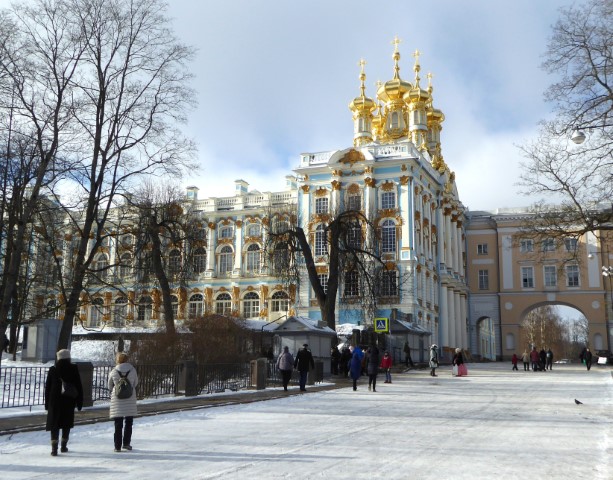 Did you read Tolstoy, Dostoevsky or Pasternak in your youth and if so, how do you imagine Russia? For me, it has always been snow covered with dazzling buildings whose magnificence has dulled during the long Soviet years. So my first visit to St Petersburg simply had to be in the depth of winter.

You may well have been to the St Petersburg and the Hermitage, but even if you have, they say it takes seven years to see all its treasures. What we saw in a few days was mind blowing especially when combined with visits to gilded palaces and exposure to Russian history and culture. That’s before adding in visits to the Fabergé museum and the Mining Institute (so much more interesting than its name suggests) and throughout having expert and friendly guides to hand.

There was already snow underfoot, and light snow started at breakfast time on the first day. It was bitterly cold and treacherous underfoot. I was slightly apprehensive about slipping and falling, but none of us did, clad in stout boots as we were. We set off on our first city tour stopping here and there to stand and admire a view or visiting numerous churches. We were a party of nine plus a guide, and a tour expert and had a small bus to take us around.

There were palaces all around us with yellow, green and blue facades, white columns, ornate porticos and gilded domes. Many of them house the Hermitage museum with its two million or more exhibits. Others are Government Ministries or University departments. The city is ringed by rivers and canals, all of which were frozen and covered in snow, so there are bridges everywhere. The centre of the city is almost devoid of high rise and modern style buildings, so there is a great sense of unity to the architecture. Peter the Great did have the city constructed on swampy land so that may well contribute to the lack of height.

The first stop was the Peter and Paul Fortress which was built on an island in the Neva River and intended as a defence for the city but never used as such. It had very deep foundations to support it. At its centre is St Peter and St Paul Cathedral with its towering gold spire and this cathedral houses the remains of all but one of the Tsars. It was our introduction to Russian Orthodox Churches where every surface is ornately decorated, but no chairs or pews as the congregation stand. First, we had to pick our way carefully over the snow-covered and icy cobblestones with a chilling wind trying to find any chink in our armour of padded coats, hats, scarves and fur lined boots. The inside of every building is well heated so once inside the layers of protection have to be reduced, but the religious buildings do not provide cloakrooms presumably because visitors stay for only short periods.

Inside the Cathedral every wall is covered in icons, paintings or is gilded. Look up, and there are exquisite paintings on the ceilings too. There seems to be no surface left which has not been decorated.

Next, we were dropped off at the Mining Institute, not usually regarded as a tourist destination and didn’t sound very inspiring, which just shows that preconceptions are invariably wrong. The Institute is housed in a neoclassical building dating from 1811 when it was the first technical college in Russia. It was founded by Catherine the Great in 1773 and still thrives today as a University. The inside is as ornate as any palace, but that is not the main attraction as it houses what must be one of the finest collections of minerals and gems in the world. So much beauty remains within the crust of the earth still to be discovered. The Institute has a mine under the courtyard which familiarises students with the layout and workings of a real mine.

Students, academic and other staff all wear uniforms with their status denoted by pips on their sleeves. Photographs of the exhibits are not permitted, but we were allowed one photo of an interior. Our Institute guide was a lecturer who spoke perfect English but admitted afterwards that she had been nervous as ours was the first party she had taken round. Strangely they insisted on taking a photo of us which they later presented to us in calendar form. I don’t think they get many tourists visiting. There is even a Russian Orthodox chapel within the Institute which is now in use again. By the end of the tour, I had a yearning to study geology, which does say a lot for the Institute.

Lunch was to be taken at a local restaurant, but there was a problem in our bus dropping us off as a film was being shot immediately outside. It was set in 1900 according to an ornate sign on the bridge, and a coach and horses crossed the bridge as we approached. It was still snowing, and we had to make a circuitous approach as many roads were closed for the filming. While the actors and extras were dressed in voluminous coats and dresses, they all looked freezing in the bitter weather. To help create the atmosphere artificial snow/mist was being wafted over the scene, and we had to wait for a small pause in filming to make a dash for the restaurant, all without slipping on the ice.

I need to mention the subject of toilets as we were warned that they might be primitive and to take our own toilet paper. I can only say that they were a much better standard than many in the UK and kept scrupulously clean. Times had changed since we visited Poland in the 1990s when on entry we were issued with a single sheet of paper. In the restaurant the decoration of the toilets was eclectic; there was an antique typewriter in the cubicle I used, but no writing paper.

Afterwards, we make our first visit to the Hermitage starting with the Winter Palace. The collection dates back to Catherine the Great who wanted somewhere to house her growing art collection. For the tourist there are various dilemmas, firstly it is an impossibility to see all the exhibits as that would take years. Secondly, once your coat, hat, scarves and gloves have been left in the cloakroom, you rapidly become overheated in the hothouse atmosphere of the museums as they have a very efficient system for piping hot air around. Fortunately, our excellent tour guide, Amina, had already decided what to show us on this first visit. At this time of year, few tour groups are vying for space. The Chinese like to get there first thing in the morning, so we avoided them by going in the afternoon. Other visitors are mainly couples, so there is plenty of room for us to explore, but we do need to keep up with our guide as it is easy to get lost even with a map. We all have radios and earbuds so hearing Amina is easy but she is not tall and it is not always easy to see where she has got to after stopping to admire an exhibit.

The Winter Palace was formerly the private living quarters of the Imperial family, and after passing through the small and large throne rooms, we came to the rooms used by the Provisional Government after the Revolution of February 1917. Here the Government were captured when the Palace was stormed by the Bolsheviks in the October Revolution the same year. The palace is now fully restored from both the damage caused by the revolutionaries, the Stalinist era and subsequent bombing in the Second World War and its interior is ornate beyond the powers of description.

There is a vast Peacock Clock made for Catherine the Great by an English clockmaker in the 1780s, but it had to be reassembled on arrival. It is a gold automaton clock with a peacock which flaps its wings and turns its head and an owl and a squirrel which similarly animate when the hour is struck. It usually is dormant, so a video beside it shows the clock in action. But we were fortunate as having left the room, we’re recalled as a party of Russian Orthodox clergy have entered the clock room, and the peacock is set in motion for their, and our, delight. It is housed in an enormous glass dome, and the peacock keeper had gone in to wind up and supervise the action which is successfully completed without incident. The crowd breaks into applause as they must have done for centuries at this wondrous sight. After that, we walked through room after room looking at masterpieces of paintings, porcelain and sculptures all housed in spectacular settings. It is overwhelming.

We had a timed visit to the locked Diamond Room which has its own curators who took us round describing every exhibit in loving detail. The room contains Catherine the Great’s jewellery, jewelled diplomatic gifts to the Imperial Family, and Scythian gold from the 4th century BC which has to be examined through a magnifying glass to see the fine detail. There was time afterwards to visit a few more galleries before getting back to our hotel at 5.30, in time to recycle ourselves for various evening activities. We have walked 4.8 miles around the museums today.

Three of us went to see the opera Lady Macbeth of Mtensk (Shostakovich) at the renowned Mariinsky Theatre. While the auditorium is impressive, Instead of theatre style seating it had dining chairs which neither supported the back nor any other part of the anatomy. Suffice to say that sitting on the chairs was excruciating, particularly as the running time was four hours. The first act alone was two hours. The music was superb, the set dreadful and the plot entirely implausible, as is often the way with operas. It featured the young wife of an older merchant who falls for a randy young labourer on their country estate. The young wife was played by a stout matron who wouldn’t see 48 again and the young labourer by a man of at least 50 who resembled a beached whale more than a young lover. To cap this, the father of the merchant appeared to be far younger than the merchant himself.

They were all miscast but had good voices, and there were surtitles in English to follow the plot, but it was impossible to put the physical inappropriateness of the singers aside. When it came to the time for the young lover, and then the wife, to climb out of a bedroom window, they were as physically incapable of this feat as I am and had to be helped and supported by the chorus. With the length of the opera and the seating, you will understand why we were greatly relieved to get back to the hotel.

The Astoria hotel where we stayed was opened in 1912 but has undergone recent restoration and is now part of the Rocco Forte group. It sits on one side of St Isaacs Square overlooking the Cathedral of the same name with a beautiful view of it from the front bedrooms. In 1919 Lenin spoke from the massive balcony on the first floor. It had been built opposite the Imperial German Embassy and at the start of the siege of what was then called Leningrad; Hitler planned to hold a victory banquet at the Astoria thinking that German troops would quickly conquer the city. It is said that he went so far as to have the invitations printed, but of course, he never did capture Leningrad which held out for 900 days before being relieved. Other guests have ranged from Rasputin to Tony Blair.

This Site Is Protected By
Shield →