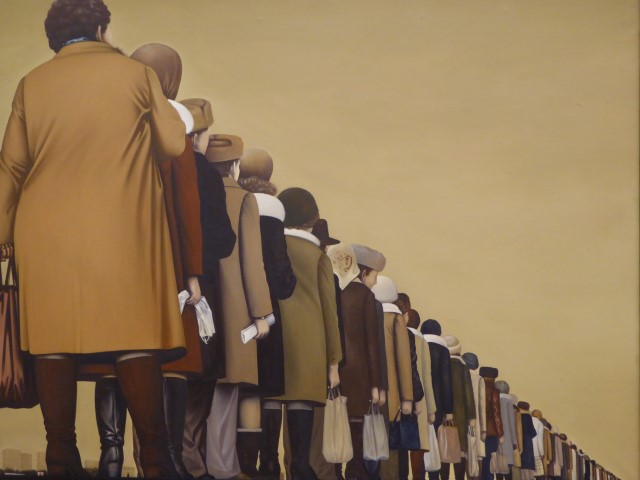 Sleet/snow started again at breakfast. Our first visit was to the Russian Museum which houses the largest collection of Russian Art in the world, over 300,000 exhibits. It is in a palace, of course, the Mikahailovsky palace which Alexander III ordered his brother to sell to the State so that it could house the collection. We started with the Icon galleries and gradually move through the ages. In the Soviet Union art, like everything else, was controlled and the work of dissident artists could not be displayed or tolerated. Only artists who belonged to the official Artists’ Union could thrive, and they had to be willing to depict such things as happy village scenes celebrating the harvest even when there was none. Refusal to paint to order meant being classified as a dissident with all the ramifications that followed. After the fall of the Soviets, the citizens suffered severely with the closure of armament factories and naval shipyards. It was the end of an era in which there were guaranteed jobs for everyone, and it hit very hard. Shortages of food continued. 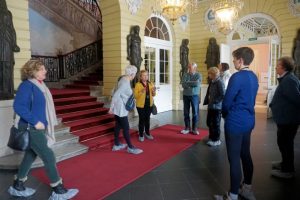 At the Russian museum our guide, Amina, appeared to know the history of every displayed artist and his or her family along with the details of those whose portraits are displayed. One of the most poignant paintings is ‘The Queue’ painted by Alexei Sundukov in 1986. It depicts an endless queue, typical of those which assembled daily to wait to buy any food or goods that the shop might have that day, even if they ultimately returned home with only pickled beetroot. It was the role of housewives to find something, anything, however inadequate with which to feed their family and keep starvation at bay. It wasn’t only in the Stalinist era that people starved to death. 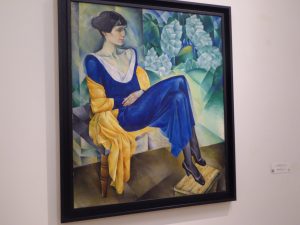 From the Russian Museum we walked to the Ethnography Museum where, shedding our coats again, and stepping through yet another security arch, we were whisked through galleries. These explain the diversity of the history and culture of Russians, Ukrainians, Belorussians and the tribes of Central Asia, the Caucasus and Siberia, to be admitted to locked vault with a collection of articles made of gold, silver and precious metals. A room guide explained the symbolism of the exhibits; most of us had never given a thought to the diverse origins of those who became the people of the USSR. 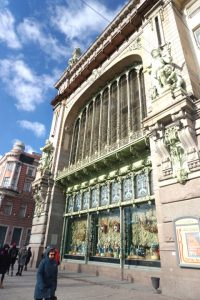 Next a short bus ride and a walk to the food emporium at Eliseev, a bit like Fortnum and Mason’s Food Hall. The shop is a treasure trove of cakes, patisserie, chocolate and all things edible but fattening. We had lunch is an upstairs room with fine antique furniture, but sadly I have no recollection of what we ate. Afterwards, we were unwisely let loose in the shop to spend. One exquisite tin of chocolates that I bought as a present turned out to have been made in England. The food miles do not bear thinking about in this eco age. 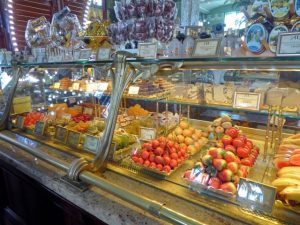 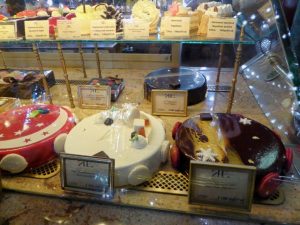 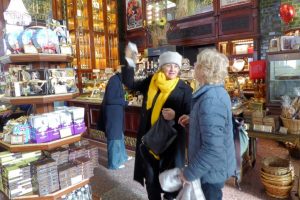 Having wound our scarves tightly around us again, we set off on foot to the Faberge museum which is housed in the Shuvaklov Palace on the banks of the Fontanka Canal, frozen solid of course. The sun has come out, and glints off the golden turrets and gilded facades and with a startlingly blue sky above it the view is stunningly beautiful. 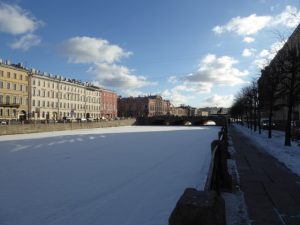 The Faberge Museum houses the collection of the New York Link of Times Foundation owned by the Russian entrepreneur Viktor Vekselberg and now surpasses the Faberge Collection at the Kremlin Armoury. The museum has on display some of the most famous pieces such as a number of the Imperial eggs created for the Royal Family. It is astonishing that some of these creations survived the turbulent years that followed. The very first egg was created for Tsar Alexander III in 1885 for his wife, Empress Maria Feodorovna, and was a plain white enamelled egg which opened to reveal a golden yolk and within the golden yolk a golden chicken, within which was a precious ruby pendant. Each egg could take the jewellers up to eighteen months to create. 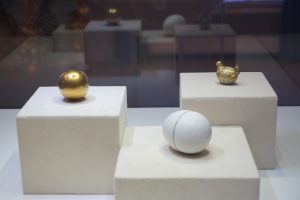 Subsequently, Imperial eggs always contained a surprise of some sort, and the exteriors became more and more ornately covered with jewels. Alexander III commissioned ten eggs in all. Nicolas II continued the tradition and always had two eggs made, one for his wife and a different one for his mother taking into account their favourite flowers and jewels. He commissioned forty eggs in all, the last in 1916. Few of the ‘surprises’ survive, or at any rate, their whereabouts are not known. 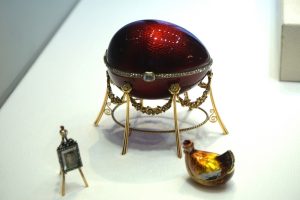 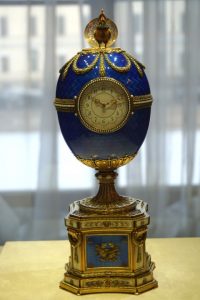 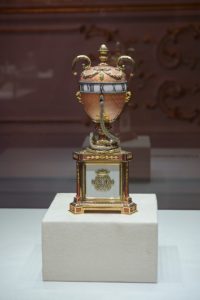 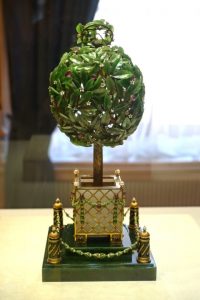 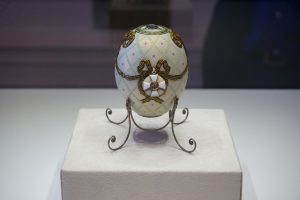 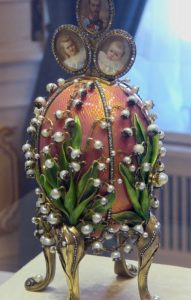 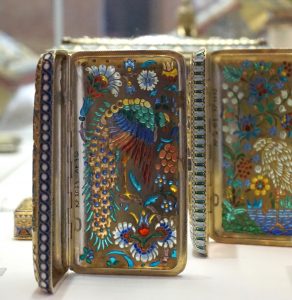 It was not only the Imperial family who commissioned Faberge eggs; anyone with sufficient wealth could do so, such as the1914 Nobel Ice egg. Apart from the eggs, the museum contains hundreds of other stunning Faberge pieces. Anyone really keen on Faberge can still spend a fortune on contemporary Faberge jewellery in their gift shop.

We then moved on to the Prince George Galitzine Library created in memory of her father by, Princess Katya Galitzine who is both our tour expert and host whilst in the city. It is a public library of Anglo Russian books which fill the gap in Russian literature with books that were banned during the Soviet era and also has a collection of Russian books from before the revolution, including the local telephone directory! There is also a collection of rare magazines and literary journals known as Tamizdat. The library is housed in rooms in a house which was once the residence of Katya’s grandmother and we were able to take a swift peek at what were once the family rooms before the Soviet era and look at photos of how they used to look. As with so many of our visits, there was insufficient time to explore the contents of the library, much of which was in English. 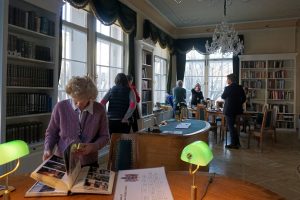 That evening, as many of our party were going to the ballet, we went out to eat by ourselves at Teplo, a lively small restaurant, which seemed very popular with young and old alike. The only surprise was when we ordered Beef Stroganoff which was listed in the menu as served with mashed potato. However, the waitress returned apologising because, she said, there was no mashed potato; it was bulgur wheat or nothing. I’ve never ever heard of a restaurant running out of potato before, mashed or otherwise.

It was still snowing when we walked back to the hotel but not too heavily. St Isaacs looked magnificent with its flood lighting and the snow falling round it. 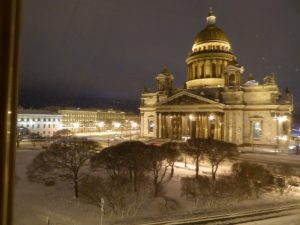