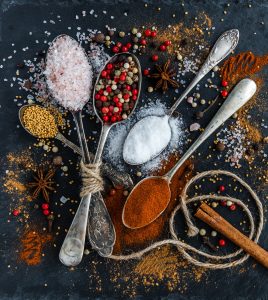 I was married in the early seventies.  Before that, I had a couple of years as a single girl with my own house.  This was a newly built semi-detached at Tile Hill near Coventry.  One of the good things about buying it from the builders was that I was able to say a big NO to some of the silly things, like having three doors in the kitchen leaving me with nowhere to hang kitchen cupboards.

The garage was going to be too small to park a car in, so I got the builders to make it bigger.  Even then it was necessary to drive in until the front of the car touched the end wall before I could be sure that the garage door would close.  I couldn’t afford carpets anywhere so had to paint all the tread of the staircase – at that time it was fashionable just to carpet the middle of the stairs, I can’t think why.  I had no money left over for a carpet for the open-plan ground floor. So I hired a sander and sanded the floorboards and then varnished them.  It looked fantastic, so long as you didn’t stay in the room long as the draughts coming up between the floorboards added an arctic chill. The house didn’t come with central heating, just two gas fires and even with these; it was always cold, although the gas bills were enormous.  I was convinced that the gas for the whole of the road was included on my bill.

All this didn’t stop me from wanting to entertain.  I had no dining table, so I put a linen cloth (donated by my mother) over a pasting table and hoped that it would hold up under the weight of dishes.  I had bought a DIY wardrobe, but it was impossible to make a free-standing wardrobe from the kit.  So I used the planks from the wardrobe to suspend between a few chairs to make bench seating for my guests.  I was anxious to make a good impression as a hostess, so I took particular care over the menu for my first dinner party.  I included a dessert called ‘Mont Blanc’ which as I remember called for me to roast chestnuts and then peel them.  Have you tried peeling hot chestnuts?  Then they had to be pureed, no mean job without a blender, and finally cream whipped within an inch of its life before mixing everything into what the recipe assured me would be an irresistible pudding.  Not only was it time-consuming and laborious to make, but I can report that it was indeed the worst pudding that I have ever tasted.  Be thankful that I am not passing the recipe on to you.  Strangely the dinner party was a roaring success, but that may have been due to plentiful supplies of wine to go with it.  No one was overly concerned about drinking before driving home in those days.

After I was married we moved up one from the pasting table and for many years had a pine table, bought from Woolworths, as our dining table.  The quality of the food improved tremendously too.  In those days, you had to cook what was in season and for a long time, I relied upon the seasonal recipes provided in The Times by Katie Stewart.  Kenilworth was well blessed with good food shops.  We had no less than seven butchers and seven bakers in the main street.  Not quite so many greengrocers, but enough to have a good choice.  Saturday mornings were spent queuing to get meat and bread at my favourite shops, meeting the same people in the queue every Saturday.  It was all rather social.  We were also fortunate to have what was then a Bishops supermarket for general groceries.  We thought of it as a big store, but by today’s standards, it was tiny.

As far as kitchen equipment was concerned, I had a small blender which my father had purchased in the fifties for making fruit smoothies which were not in vogue at that time.  I used it to make soups.  The waist-high fridge had a freezing compartment at the top which used for ice-cream, and ice cubes and that was more or less it, other than we did have a gadget for grinding coffee beans.

I soon got a job in the legal department of Automotive Products in Leamington Spa, the first female executive that the company had ever appointed.  I was therefore entitled to take lunch in the Executive Dining Room and that was what I did, although I hated it for the first two years since, as the only woman, I was given a table on my own in the middle of the room. All the men sat in foursomes around the perimeter and laughed and chatted.  When I was finally accepted and other managers allocated to the table, it became an enjoyable break instead of an ordeal.  We stopped work for lunch and went and sat down for a two-course meal and coffee.  That was the custom whether you worked on the shop floor or in the Board room and was probably healthier than grabbing a sandwich and working right through the day.  It was always meat and two veg, although salad was available in summer, including the odd caterpillar, or worse, which the canteen cooks seemed unable to flush out of the lettuce.

There was a Marks and Spenser food hall in Leamington.  Also, the rather grander Burgis and Colbourne had a food hall for special treats.  I entertained quite a lot, and mostly it all went well, other than one time entertaining a somewhat obsequious new assistant manager and his wife, when the main course was quite frankly a disaster.  The dessert wasn’t too bad, but nothing to write home about and I vowed then and there never to try out new dishes on other people without first testing them.  Our guest had been lavish in his praise of every disastrous dish until I had reached the point where I wanted to scream at him.  My husband had gone out to the kitchen to make the coffee and was taking a long time, so I went out to see what had happened.  It appeared that we had run out of coffee beans and I found him putting instant coffee in the filter and passing hot water through it, all the while muttering “If he says this is delicious I’ll pour it over him!”  Even our guest found it impossible to offer any praise for the coffee and went soon after, for which we were extremely grateful.

Dining out in the seventies tended to be at the Berni Inn chain where the evening always started with a schooner of sherry, then a prawn cocktail, followed by steak, and finished with a cheesecake or Black Forest gateau.  I never really liked the sherry, now gone out of fashion, nor the cheesecake or the gateau.  What I did like was the Steak Diane that we had at the old Honiley Boot Inn, when it was just a small inn.  It was a favourite eating place for us when we had family visiting or were celebrating a birthday or anniversary.  Until, that is, the occasion when we went in and there was no one else in the dining room.  The waiting staff seemed scarce and having been seated; a long pause ensued while we waited for a menu.  The pause stretched out so long that we became embarrassed, and quietly crept out unobserved and went home.  It was a week or two later that we saw in the local press that they had been prosecuted for having mouse droppings in the kitchen.  We never went back. 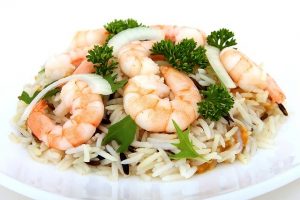 The following seventies dish started as a Katie Stewart recipe but then took on a life on its own as I adapted it for other purposes.

a light lunch or supper dish which you can make in advance and serve cold.

8 to 12 ozs of prepared prawns

Juice of half a lemon

Serve with a cold rice salad

Measure oil into a saucepan and add finely chopped onion.  Cover and cook gently for a few minutes but do not brown.  Stir in curry powder and cook for a few further moments to draw flavour.  Stir in tomato puree diluted with water.  (I take no account of particular quantities, just add tomato puree and water generously.)  Add a good helping of mango chutney (specified quantities don’t matter much.)  Cover with lid and simmer gently for about 5 minutes.

At this stage the mix makes a good barbecue sauce without adding anything else.

To finish off the prawn recipe, add mayo and blend well.  Stir in cream, lemon juice and finally prawns.  Leave in the fridge for prawns to take on the flavour of the sauce.

Plain boil rice, drain and add vinaigrette dressing.  Spoon rice down one side of serving dish and prawns down the other.  Garnish with hardboiled egg and chopped parsley.